Brad had the chance to fly EVA Air business class from Los Angeles to Taipei on his trip to Chongqing and had nothing but positive things to say about the experience. I’ve read multiple reviews from frequent travellers who claimed that EVA offered the best all-around business class experience, with many saying it was comparable with some first class products.

I was excited to try this product for myself, so when booking my return flight from Singapore I was happy to see a one-stop option from Singapore to Vancouver via Taipei, with both segments operated by EVA Air on their Boeing 777. This would give me a good opportunity to review a short and long haul flight, both with the same business class cabin!

After spending some time walking around the airport and checking out the Singapore Airlines SilverKris lounge, I headed to the gate. Singapore Changi does security check at the gate, so keep that in mind when leaving the lounge if you’re someone who likes to board last. Thankfully Singapore is an extremely efficient airport and security check has never taken more than a few minutes for me. Boarding began right on time and I was greeted by one of the cabin crew who personally escorted me to my seat, 9k, in the rear business class cabin. The cabin layout is reverse herringbone in a 1-2-1 configuration, very similar to what Cathay Pacific offers on many of their long-haul planes. I’m not a huge fan of the colour combination, though that’s just personal preference and doesn’t impact the comfort of the seats. I really like how private the reverse herringbone seats are. For solo travellers, a window seat is the best choice for maximum privacy. For those travelling together, though, you may want to choose the middle seats to converse. Directly behind the rear business class cabin was EVA premium economy, which looked surprisingly comfortable. I may even have to try it one day… 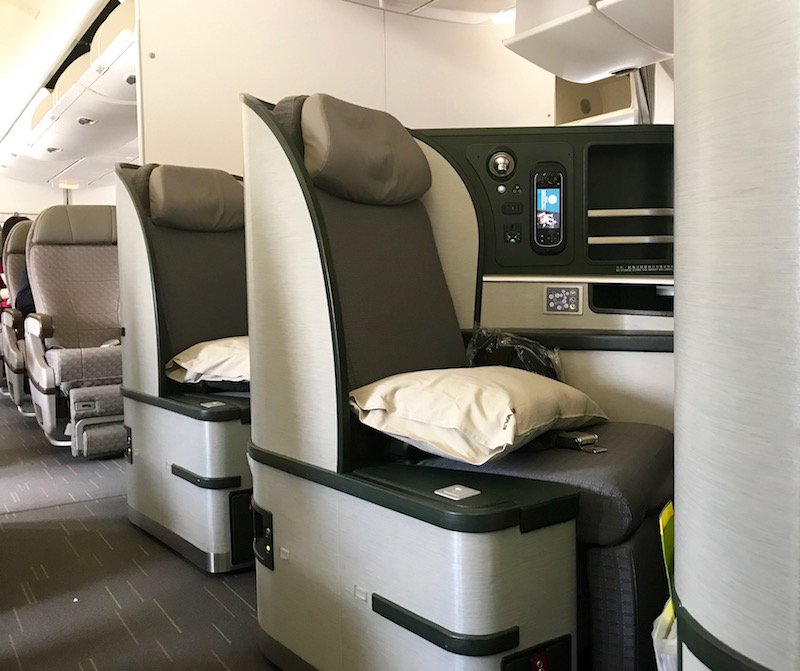 It’s really amazing how private these seats are. Once settled in you really don’t see anyone else in the cabin without trying. One thing I noticed was the tight squeeze between the aisle and the seat. Maybe I just didn’t notice, but I don’t remember the space being that tight on the Cathay Pacific Airbus A330, which is a smaller plane. To illustrate just how narrow the passage is, here’s a picture with my size 8 boot for scale. Narrow Space Between Aisle And Seat

Within a few minutes of being seated, the cabin crew were around offering pre departure beverages and warm towels. This was a nice touch on a short(ish) flight and something I missed on all of my ANA business class flights. We pushed back right on time despite a crazy thunderstorm passing through only moments before (something that would shut our airports down but so common in Southeast Asia) and made our way to the runway. After a bumpy climb, the seatbelt sign was turned off and meal service began shortly after, beginning with drinks and warm nuts. For lunch, there was a salmon appetizer, and a choice between beef, snapper, or chicken and potato soup, followed by a fruit plate and chocolate orange cake. I chose the pan fried snapper with mixed vegetable and potatoes and thought it was very good. The entire meal service took about 60 minutes, at which point it was time to recline the seat a bit and check out the in-flight entertainment. The seat goes fully-flat, though it was not needed on this short daytime flight. Seat controls are intuitive and it wasn’t difficult to find a comfortable position to watch some television. The in-flight entertainment system was good, especially for such a short flight, and featured a variety of western and asian movies and television programs, however I ended up napping for a little bit with the map displayed. The remote is located just beside the seat next to the power plugs and storage area, and was easy to use and very responsive, unlike some older systems. After a couple hours of napping I woke up to the captain announcing our initial descent into Taipei, and to prepare for a bit of a bumpy ride, though it ended up being quite smooth. We touched down just after 7pm in Taipei and made our way to the gate shortly after.

This was probably my favourite short-haul business class flight to date, even beating out my Singapore Airline business class flight from Singapore to Bangkok. With an industry leading seat, terrific food and beverage options, and the friendliest cabin crew you could ask for, there’s really nothing to fault with the on-board experience (though I do admit the lounge experience could be improved in Taipei if they really wanted to be the best). I was really excited to try out the same cabin on my long-haul flight from Taipei to Vancouver, and suspected I would agree with every other person who’s ever flown EVA Air; that they are simply the best.

Using 77,500 Aeroplan miles for a one-way flight from Southeast Asia to North America is a phenomenal value considering the product you get. Also, EVA Air doesn’t impose fuel surcharges on Aeroplan redemptions, which makes them a top contender if flying to Asia. You could earn enough points for a one-way flight to Southeast Asia by applying for the American Express Business Platinum card, which is currently offering 40,000 Membership Reward points (1:1 transfer to Aeroplan) after spending $3,000 in the first three months of membership. Check out our posts on applying for a small business American Express card and strategies to meet high minimum spend requirements to learn how this card could be right for you!

While I was completely impressed with this flight, I ended up being blown away on my flight to Vancouver, which easily competed with some of the best first class products I’ve flown. Check back later this week to learn more about that flight!

Have you flown EVA Air business class? Tell us about your experience in the comment section below!