My EVA flight from Singapore landed just after 7pm, which meant I had a solid few hours to spend in the business class lounge before my flight home to Vancouver, which was scheduled to depart at 11:55pm. The EVA Air lounge in Taipei wasn’t my favourite, and I chose not to do a full review since Brad had been here just a couple of months prior and things seemed relatively similar, except it was much more crowded with plenty of evening departures to North America. I would be flying the same EVA Air Boeing 777 business class product that brought me from Singapore, though the soft-product would be enhanced on this long-haul flight, including additional amenities and enhanced meal service.

I spent some time walking around the terminal before boarding, which felt really busy given the time of night. Most of the gates at Taipei Airport are themed. For example, one is completely decked out in Hello Kitty decorations, which I found cute and amusing! I headed over to our departure gate about 10 minutes prior to scheduled boarding, and found a mass of people already in line. I always like to be first on board to take pictures without other passengers, but it seemed this wouldn’t be the case on this flight.

Boarding began right on time, and similar to my previous flight, I was greeted at the door and walked to my seat in the rear mini cabin. This time I was seated in 9A, on left side of the plane. Thankfully most of the people who were standing in line were seated in the forward business class cabin, and I was able to get some pictures! This EVA Air Boeing 777 business class product was slightly refreshed over the last one I flew, with a different green throughout the cabin and updated seat fabric. While still not my favourite colour scheme, I did find it to be an improvement over the dark green on the older version. 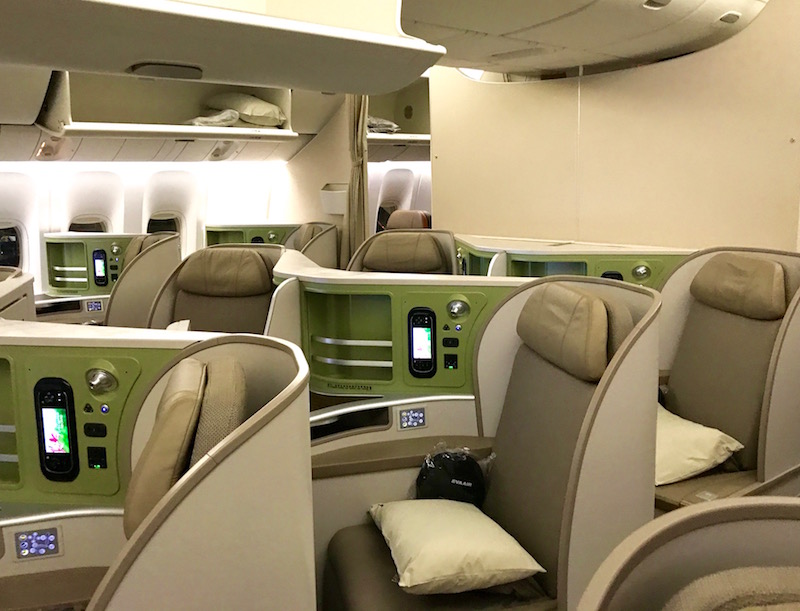 The seat, while refreshed, featured the same functionality as the older cabin. Reverse herringbone is one of my favourite configurations for long-haul business class for privacy, though there are a couple of things I find annoying. First, the in-flight entertainment screen must be latched during taxi, take-off, and landing, and second, there is no floor storage for small bags – everything must be stored overhead during these times. Yesterday I published a review of the similar business class product from Singapore to Taipei, and wanted to focus more on the added amenities found on this long-haul flight. Probably what excited me most on this flight was the Rimowa amenity kit! EVA Air is the only airline providing these in business class (Thai Airways offers them in first class and Lufthansa first class features them seasonally) and they are a fantastic collectors item. Each kit came with standard contents, including some Melvita branded toiletries, toothbrush, eyeshade, socks, and earplugs. There were also pyjamas and noise cancelling headphones waiting at the seat (the same headphones were found on my shorter flight also). The pyjamas featured a funky pattern and actually fit quite nice. Furthermore, the material was light and breathable, which can be important on Asian carriers without personal air vents, where the cabin temperatures can get quite warm. Prior to takeoff, the cabin crew came around and offered a choice of pre-departure beverages along with an amuse bouche, which was not offered on my previous flight. EVA Air is known for offering very expensive champagne in business class, having previously featured both Krug and Dom Pérignon. Being served on this flight was Veuve Clicquot La Grande Dame 2006, which is one my favourites! The business class cabin ended up being full by the time the doors closed, and we pushed back just a few minutes behind schedule. About 15 minutes after take-off the seatbelt sign was turned off, at which point I went to the lavatory to get changed. The bathroom was small, but spotlessly clean throughout the flight and featured a nice assortment of amenities, along with a fresh cut flower. Meal service was just getting started when I returned to my seat, beginning with another glass of champagne. I wont be discussing the full meal service in this short review (look for full details in the comprehensive review coming soon) but can say everything was delicious. The highlight for me was this dessert, a cake made especially for EVA Air by Taipei eatery, SEASON. Being such a late departure, this flight was really all about the sleep. Once my dessert was cleared, the cabin crew asked if I would like my seat turned down. While most business class flight provide bedding, very few actively offer to make your bed, which is always a nice touch. I took the opportunity to use the lavatory one last time and returned to a perfectly prepared bed (the cabin attendant also refilled my champagne – nice touch). I found the bedding to be incredibly comfortable, including a thin mattress bad, thick pillow, and plush duvet (which was maybe a bit too warm near the end of the flight). In terms of space. I found the bed to be large enough, especially with the armrest lowered for additional width, and had no complaints with the size of the footwell (though I am only 5’8). A Fair Amount Of Space For Sleeping

I managed to get quite a bit of sleep and woke up just 2 hours outside of Vancouver. I decided to have some breakfast before landing (even though it would be evening in Vancouver) and went with the seafood crepe. While delicious, it did seem a bit heavy after a long flight and I likely would not choose it again. About 30 minutes prior to landing, the cabin crew came around and thanked each passenger for choosing EVA Air and reminded them to store all belongings in the overhead bin and latch the in-flight entertainment screen. We touched down in Vancouver a little bit ahead of schedule and made our short taxi to the gate!

After flying two segments back to back, I’m prepared to say this is my favourite overall business class product. The service was phenomenal, the amenities and food/beverage offerings were comparable with other first class products, and award availability is usually really generous from North America to Asia. Using 77,500 Aeroplan miles for this flight was good value, especially since EVA Air doesn’t impose any fuel surcharges (unlike most other Star Alliance carriers flying over the Pacific).

I wouldn’t hesitate to recommend EVA Air business class to anyone looking for a world-class experience. I’m in the process of booking another round-the-world trip for later this month and hope to get another segment with EVA Air from Vancouver to Taipei!

Have you flown EVA Air long-haul business class? Tell us about your experience in the comment section below!