When I originally planned this trip I was scheduled to fly to Paris from Istanbul on a Turkish Airlines Airbus A330, with similar seating the to disappointing 777 I flew from Jakarta. However, I was having such a nice time at The Ritz-Carlton Jakarta, I decided to extend my stay and rearrange my flights. There are several direct flights between Istanbul and Paris, but when I called Aeroplan to change my ticket the only one available was on an A321. While definitely a downgrade from the lay-flat configuration offered on the A330, it was still much better than what most European carriers offer on short flights (economy seats with a blocked middle seat).

I arrived into Istanbul almost an hour late due to a significant delay at Jakarta airport. I didn’t manage to sleep well on the flight and was really thankful to have access to the Turkish Airlines business class lounge for my 4-hour connection. Much like the Turkish business class product, this lounge has been hyped to death, and I personally didn’t get the attraction. Yes, it’s huge, and yes, it’s quite beautiful, but oh my gosh the crowds. There’s nothing like getting off a 12-hour flight only to find a lounge which felt more like a Costco parking lot. I literally walked around for about 10 minutes looking for an empty seat, with a steady stream of other people in front of me doing the same thing, darting towards seats as they came available. When I did manage to get a seat, it was in a dining section without power plugs and on the path to the bathroom, so there was a steady line of people whizzing by on the way in, which is not exactly peaceful. I considered leaving the lounge to find a quiet spot in the terminal, but similar to the lounge, Istanbul airport seems to be over capacity, and there wasn’t a quiet spot to be found.

Thankfully after a couple of hours some of the crowds disappeared (still not nearly enough to get photos for a review though. You can check out a full review here by fellow travel expert James Dozer). I managed to find a more comfortable seat in the main area and got some work done before my flight. Boarding began at 10:30am starting with a couple of passport checks at the gate. I was welcomed by two of the cabin crew and settled into my seat, 4A, at which point I was brought the signature Turkish Airlines welcome drink by the onboard chef. The Turkish Airlines Airbus A321 business class product is very similar to what you would find on domestic first class in America, and featured 20 recliner seats in a 2-2 configuration over 5 rows. The seats felt a bit more spacious than first class back home, and featured a bit more adjustability. 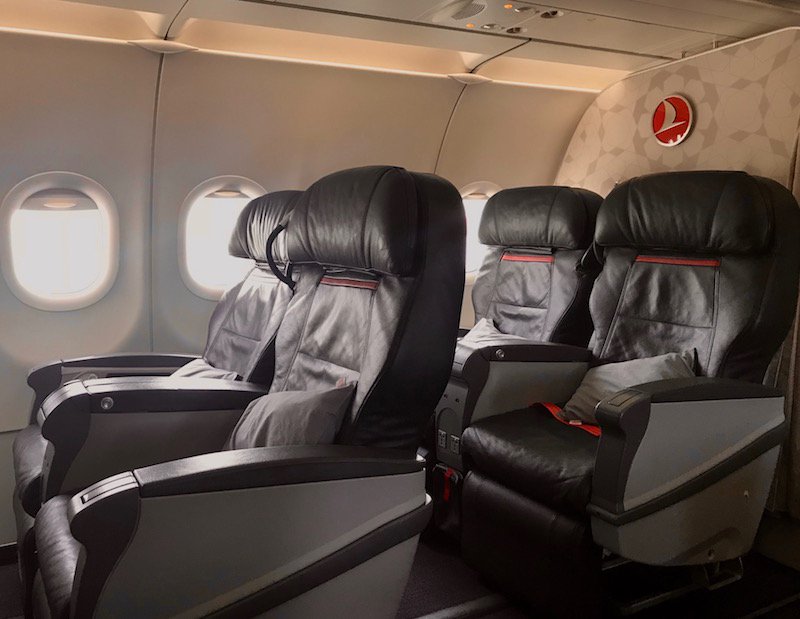 Seat controls were basic and easy to use, and featured recline, a slight leg support, and lumbar control. The headrest was also adjustable and featured an individual reading light. The cabin ended up being about half full, and the crew came around and offered refills and a snack before departure. They also distributed menus, decent headphones for the in-flight entertainment, and priority immigration cards for our arrival in Paris. Seat storage was fairly good, with a seat back pocket large enough for a laptop and floor storage for personal items. The overhead bin space ended up being quite packed with bags from the economy cabin, so I kept my backpack under the seat in front of me, which didn’t really impact my legroom comfort. We pushed back on time and made a short taxi to the runway. We were about third in line for takeoff behind a few other Turkish flights, and before long were in the air. The seatbelt sign was off after about 5 minutes, at which point I used the lavatory. As expected on a single aisle plane, the bathroom was small, but well equipped with Molton Brown amenities and toothbrushes available on request. I used the lavatory at the beginning and end of our 3-hour flight and found it clean both times, which is always nice. Meal service started fairly quickly once we levelled out, with the onboard chef bringing out our chilled appetizer first, consisting of a basic green salad with shrimp, and a dish of grilled vegetables with tomato and mozzarella. Everything was presented well and tasted great! Turkish is known for their DO&CO catering, and unlike the long-haul flight from Jakarta, everything tasted nice! For mains, the chef rolled out a cart with the three available choices. I always like being able to see the food before choosing, as sometimes airline menus can be deceptive. I ended up choosing the beef gnocchi, which tasted a heck of a lot better than it looked! The beef was very nicely done and tender while the gnocchi had the perfect amount of spice. With meal service complete, we had about 2 hours before landing in Paris. I was feeling quite tired from my previous flight and decided to flip out the in-flight entertainment monitor (stored between the seats) to catch a quick movie. Unfortunately the system wasn’t responding, with the flight crew needing to reset it. After that though everything was great, and I was shocked by the amount of content and quality of the screen (which was touchscreen and independent from the handheld remote). I was expecting the quality to be poor like on my ANA business class flight from Tokyo to Shanghai, but was able to watch Life of Pi with good images and sound. Watching the movie ate up the rest of the flight time, at which point we made a smooth landing at Paris Charles de Gaulle airport slightly ahead of schedule with a short taxi to the gate.

While certainly nothing special compared to international standards, this Turkish Airlines flight actually really impressed me, and ended up being better than my previous flight on the Boeing 777 from Jakarta. Although the seat is basically just domestic first class in North America, the service was nothing short of spectacular.

Unlike North American carriers, there was a full and substantial meal offered on this short flight catered by industry leading DO&CO, along with a great selection of in-flight entertainment content and high-quality headphones. While I would have preferred my original Airbus A330 to experience the lie-flat seats again, this was much better than what most European carriers offer on short flights. If ever you need to connect within Europe, don’t hesitate booking with Turkish if you want a real business class experience.

Have you flown Turkish Airlines before? Tell us about your experience in the comment section below!