While a full review will follow soon, I wanted to share a quick recap of my Turkish Airlines Boeing 777 business class flight from Jakarta.  First off, let me say that I had really, really high expectations of this flight, having read numerous positive reviews of Turkish Airlines.

Let’s start at the beginning. I checked the seat map just hours prior to my departure and saw that more than half of the business class seats were open. This was good, since the Turkish Airlines Boeing 777 business class product features seats in a 2-3-2 configuration. It’s one thing for not all seats to have direct aisle access, but middle seats in business class?! Yikes. Thankfully this wasn’t going to be an issue and the seat next to mine was empty… or so I thought.

Boarding at Jakarta airport was a bit of a cluster, with no real announcements or priority boarding save for those needing assistance. When I entered the gate area it was quite chaotic, and I was fairly sure this would be a full plane at pushback. There were about 200 people belonging to a tour group (they were all dressed the same and had identifying tags on their luggage). It seemed like most of these people were new to flying, and I would guess that most of them had never been on a plane before. Anyway, boarding began about 10 minutes late with everyone rushing for the door.

I was greeted by the onboard chef and welcomed warmly, but that’s about where the fun ended. I have never in all of my travels witnessed such a chaotic boarding process. People were everywhere, and I mean everywhere. Most seemed to be under the impression they could sit anywhere, and the cabin crew remained busy directing everyone to their seats, which resulted in very lacklustre service and a bit of a delay pushing back. As I sat there watching the chaos, I started to notice the seats filling up (including the one next to me) by people with economy tags on their hand luggage. It was clear this flight was oversold in economy and as a result nearly half the cabin was filled with upgraded passengers. I don’t have issue with economy passengers getting business class seats, but when it takes away from the experience I think something is wrong. The cabin crew were clearly overwhelmed, and the service throughout the flight was dreadful. This is a shame, because otherwise I’ve heard really positive reviews of the staff.

Anyway, moving on to the flight. The business class cabin is split into two, with 4 rows up front and 3 in the back. I had selected seat 6K, a window seat in the rear. I was actually really surprised at how spacious the cabin felt, and the seat pitch was generous enough that getting over the reclined neighbouring seat was no issue at all. Also, I really like the colours Turkish used in the cabin, and thought it felt upscale and classy. The seat width is 22 inches, which should be comfortable enough for most to get comfortable. The forward facing seats are great compared to reverse herringbone in that there’s no tight footwell to worry about. Side sleepers rejoice! The pitch is a generous 78 inches, which as mentioned before, made it no problem getting over my neighbour when his seat was fully reclined. As expected, the seat goes fully flat to create a long and comfortable sleeping space. Bedding included a thin seat cover, duvet, two pillows, and a light blanket. Due to the warmth of the cabin, I used the duvet as a further cover and slept with the throw blanket. 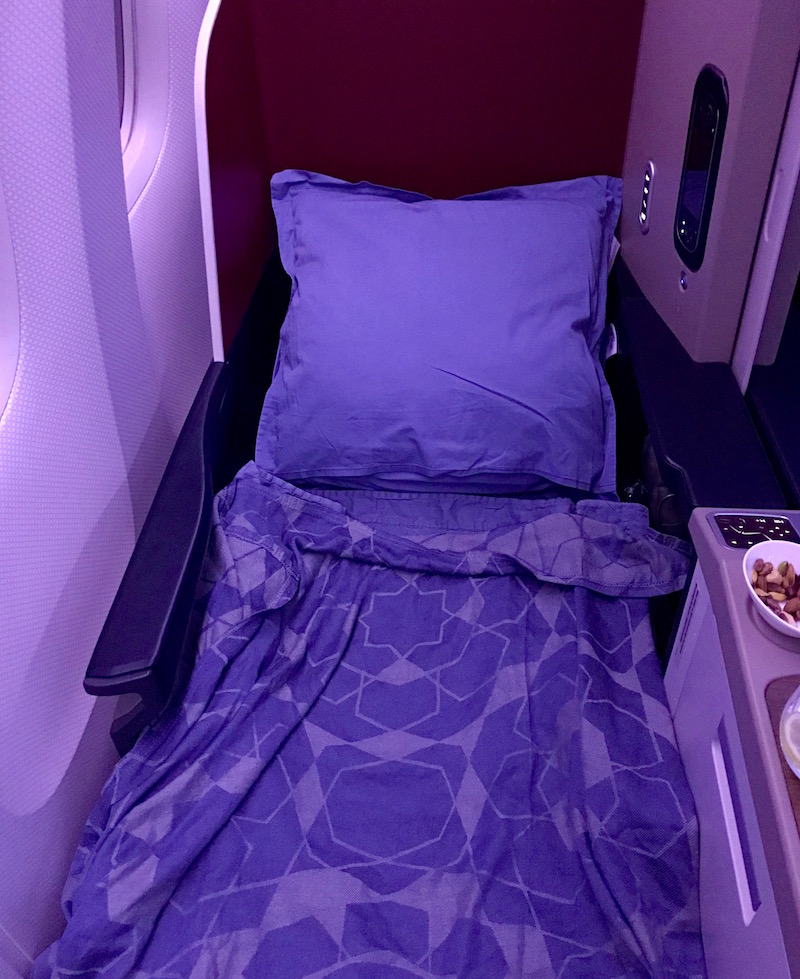 Other swag included noise cancelling headphone and an amenity kit by Bentley, which featured standard contents and some branded lotion. I had no idea Bentley was in the skincare market, and didn’t love the scent or the case. This is one of only a few amenity kits I’ve left behind in all of my travels… Interestingly enough, no pyjamas were provided, which felt especially strange having been offered some on the relatively short daytime flight between Taipei and Jakarta on EVA Air. That said, I went to the bathroom and changed into the EVA provided pants from my previous flight shortly after takeoff. The bathrooms were nice, and featured toiletries by Molton Brown and some nice greenery. There was a long line of traffic waiting for takeoff, and as a result we were delayed by about an hour. Orders were taken before takeoff for both dinner and breakfast, with the crew collecting little cards for breakfast where you ticked off everything you wanted, similar to the system hotels employ for in-room dining. While great in theory, I ended up getting nothing of what I ordered. Catering was by far the biggest disappointment on this flight, having heard nothing but great tales of Do&CO catering and the onboard chefs. While the appetizer was good, consisting of Tukish mezzes, the main course was almost inedible. I’ve never had a piece of cod so overcooked. I didn’t even think fish could get that dry and chewy (sorry for the quality of this picture. The cabin lighting made it very difficult to get photos of the food). Also, drink service was essentially non-existant… It took 3 hours from the time of boarding to get a glass of champagne, with the signature Turkish Airlines beverage offered during the chaotic boarding process (it was delicious though). Meal service concluded and I put my seat down in an attempt to sleep for the rest of the flight, although unfortunately sleep wasn’t in the cards and I spent much of the flight tossing and turning before giving up and watching a movie.

I really wanted to love the Turkish Airlines Boeing 777 business class product, but can’t say that I do based on this flight alone. The service was too chaotic to be considered good, and the food ranged between acceptable and horrible (which was probably the biggest letdown considering all of the positive reviews).

Hard product wise there isn’t much cutting edge here, with forward facing seats in a 2-3-2 configuration. The seats are wide and comfortable and provide great legroom but many don’t have direct aisle access, which is almost a dealbreaker for business class these days.

The great news is Turkish releases lots of award space and has one of the most comprehensive route networks of any airlines. Also, Aeroplan doesn’t impose fuel surcharges on award redemptions, with award flights from North America ranging between 55,000 and 57,500 miles for a one-way ticket in business class.

While I couldn’t praise the product based on this flight alone, I do look forward to trying them again in the near future assuming that this flight wasn’t the norm for service or food quality.

Have you tried the Turkish Airlines Boeing 777 Business Class product? How did your experience compare with mine?